Befuddled by the singular they?

Befuddled by the singular they? 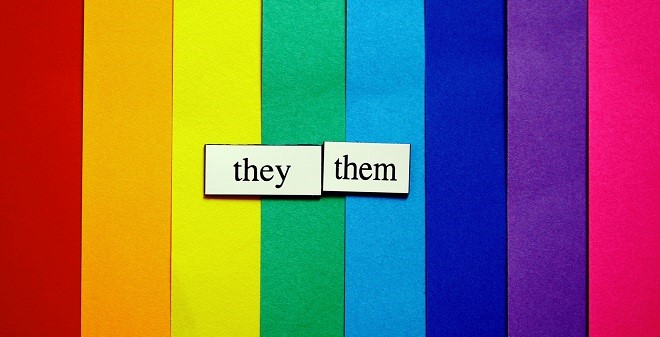 This is a column about language, specifically about getting comfortable with the singular use of the pronoun they. While the driving force in favour of the singular they is the LGBTQ+ community, which uses it not only to include both men and women but also to refer to non-binary people who identify as neither or both, nothing gets some folks’ nether garments in a twist like the suggestion that they might be used for he or she or both or neither.

This means that I can’t have a language conversation without first having another conversation: the one about gender politics. The vast majority of people who object to the singular they on a linguistic basis are actually denying the legitimacy of non-binary people’s pronouns. Yet, as soon as they acknowledge that legitimacy, the language issue becomes easier to wrangle.

Meet the “personal gender pronoun” (PGP), which is the pronoun or set of pronouns a person would like to be called by, when their proper name is not being used.

If you’re a binary person, you identify as he or she. That’s your PGP and it’s important to you. Imagine if, tomorrow, a handful of people began consistently referring to you with the ‘wrong’ pronoun. You’d be mightily pissed because your PGP is part of your identity. Now, if you have the right to feel strongly about your pronoun, surely a non-binary person may feel strongly about theirs?

I’m willing to admit that, because I try to be woke as hell, I gleefully welcome the opportunity to use the singular they, or whichever PGP is requested by the person I’m engaging with. I’m not writing this column for myself, though. I’m also not writing it for Captain Curmudgeon because I can’t hope to convince them. I’m writing for:

With that said, let’s talk language.

#1. There’s a ton of modern linguistic precedent for the singular they

If a writer uses the singular they to refer to one person, it’s because the writer is not assigning gender in that instance. Perhaps gender is unspecified or irrelevant, as in these examples:

We use these phrases so often, and with so little fanfare, that they don’t even register. Go back to my Captain Curmudgeon disclaimer a few lines earlier. Guess what? Singular, gender-non-specific they. Bet you didn’t even notice.

The Washington Post announced in 2015 that it would start allowing the singular they; in 2017, the AP Stylebook approved it, as did the Chicago Manual of Style; and, since 2019, most big style guides have accepted the singular they as grammatically A-okay.

#2. There’s a sh*t-ton of historical linguistic precedent for the singular they

Linguistics scholar Dennis Baron explains in “What’s Your Pronoun? Beyond He & She“ (2021) that the singular they has been on an “inexorable forward march” since the Middle Ages. We’ve been singular-they-ing for years. Actually, millennia.

Geoffrey Chaucer, William Shakespeare, Lord Byron and WH Auden happily used it, as did Jane Austen in Pride and Prejudice (and almost everything else she ever wrote): “I always delight in overthrowing those kind of schemes, and cheating a person of their premeditated contempt.”

So, let’s not pretend they doesn’t work. It works, it’s worked for ages, and most people are more or less comfortable with it when gender is unknown. But, as soon as gender is known, or someone looking on thinks they can assign gender, we become less comfortable.

#3. The singular they works just like you. You bothers absolutely no-one.

It’s the same you, with a different context to give each instance a different meaning. You is the most wonderful example of the adaptability of the English language, too: once upon a time, it was used only to refer to groups of people. In the plural.

For the singular, thou was used: “…if thou wilt needs marry, marry a fool…” (Hamlet).

But individuals started to see you as a respectful way to refer to one another, and “despite much booing and hooing among those who wanted to stick with thou, the practice took” (Baron, 2021). Since then, we’ve been fine with you for both singular and plural. Same same and different. No hysteria. No dire warnings of the end of the world.

#4. Nothing else is quite as efficient as they

While the English language has many fine qualities, it’s never performed masterfully when it comes to indefinite pronouns. He used to be the default pronoun for a person whose gender you didn’t know: “Everyone should cast his vote on Voting Day.”

No, thanks. Gendering all unknown people as male is a) inaccurate and b) sexist.

Here’s one from 1940: “The ideal that every boy and girl should be so equipped that he shall not be handicapped in his struggle for social progress …” (CC Fries in American English Grammar, 1940).

More recently: “It wouldn’t be as if the lone astronaut would be completely by himself.” (Nancy Atkinson, A One Way One Person Mission to Mars, 2008).

Using he to include both men and women doesn’t actually include women. Instead, it makes them “linguistic understudies, invisible and secondary” (Baron, 2020). Using female pronouns to refer to members of a group that contains both men and women — “A nurse must regularly update her skills” — is equally problematic.

What’s the alternative? The singular they, like so: “Let me know if your father or your mother changes their mind.”

They is simpler, more convenient and more effective than any alternative. Switching between he and she looks and sounds contrived, he/she is largely unpronounceable, and Franken-pronouns like zie or xe never really catch on.

Here’s Jen Doll, in “The Singular ‘They’ Must Be Stopped” (The Atlantic, 2013): “The singular they is ear-hurting, eye-burning, soul-ravaging, mind-numbing syntactic folly. Stop the singular they. Stop it now… Maybe even create a new word, and make it happen!” [Emphasis added.] Seriously, Jen? Nah, thanks. English speakers have proposed compromise neologisms like hir/hirs, Mx, ha, hizzer, shim, thare, and thon since the dawn of time. No. Dice. (Although the Swedes have achieved this beautifully with the gender-neutral hen since 2015.)

Back here, in South Africa, the Ubiquitous They can tell you all they like that champagne isn’t “champagne” unless the grapes are grown in the Champagne region of France, in which case local bubbly is actually “MCC” or “Méthode Cap Classique”. But guess what? You probably still call it “champagne”. That’s why Steinmetz (in Time, 2020) says “trying to force people to adopt an invented word is like trying to make an airplane fly by yelling at it.”

Let’s just use a word we already have. Like…I dunno… they.

#5. Other languages seem to manage

Take German (because I don’t have the intellectual wherewithal to unpack Standard Chinese, Farsi or Bangla). German has dual-purpose pronouns: sie can mean “she” or “they”. When you look at the verb that follows, you can tell whether it’s singular (sie gibt for “she gives”) or plural (sie geben for “they give”). Kein Problem!

I used to be a grammar purist. However, my mother-in-law, a literary scholar and applied linguist, taught me that, to be happy in my new family, I would need to choose between digging in my heels on language rules (thereby becoming an outcast) or being willing to adapt my ‘rules’ along with language evolution. I chose to adapt, and my writing is the better for it.

Many will tell you — and have told me, endlessly and boringly — that the notion of they, them and their as plural is unquestionable. Invariable. Fixed. Like the law of gravity. But English is not static. It never has been.

More than 300 years after the singular they had been commonly and frequently used, an English grammarian in the 1740s decided that he should refer to both boys and girls. Because…languages evolve. And, back in the future, that’s why we no longer have to use the godawful one, as in “One ought to spend more time with one’s family.” One went out with the ark. (How do I know this? The Ubiquitous They tells me.)

There will, always and forever, be people who whine about English changing and, as a result, dying. They obviously don’t read enough as literature shows us that language tends to change for the better.

Of Mice and Men, John Steinbeck’s classic novel, is based on the line, “The best laid schemes of mice and men often go askew,” which is a modern-day version of poet Robert Burns’ “the best-laid schemes o’ mice an’ men gang aft a-gley”. Not quite as clear.

Thank heavens we no longer have to contend with self-important, waffly codswallop along the lines of the following from author, poet and essayist Jonathan Swift: “The Period wherein the English Tongue received most Improvement, I take to commence with the beginning of Queen Elizabeth’s Reign, and to conclude with the Great Rebellion in [Sixteen] Forty Two.”

“Linguistic decline,” says David Shariatmadari in The Guardian (2019), is like the boy who cried wolf, “except the wolf never turns up”. Perhaps this is why nothing much has been done to mitigate the cataclysmic collapse of the English tongue: the collapse itself is “unscientific nonsense”.

I chatted to a mom friend whose child is non-binary because I wanted to understand whether or not they is hard to use in daily life when referring to a specific human being. Guess what? It is.

My friend points out that the gender-neutral they occurs when the speaker or writer doesn’t know the person being spoken about, that it refers to “an unknown someone, whose gender is not known but who is not identified in any other way either”. She says, “They is a distancing and generic pronoun, rather than one I easily apply to my own child, who is near to me and known to my heart.” She also explains that it is “bloody difficult” speaking to doctors or change room assistants about a child called they, “or even to my husband, who has brought a jersey for them. Is that one jersey for our non-binary child or two jerseys — one for each of our children?”

Note that she’s not saying it’s hard so we shouldn’t do it. She’s saying the opposite: “I find it hard but we must do it.” Also, “it’s what the world needs to keep hearing.”

Circling back to gender & inclusivity

Here’s a serious question: If we can make our language more inclusive of more people, why wouldn’t we?

Yes, the singular they can be confusing now. Even “bloody difficult”. Yet, if you read this op-ed again in 2035, it won’t be confusing anymore. You’ll laugh at the fact that we made such a hoo-ha about this (especially if you remember that to-day was hyphenated until 1959). That small blip of confusion, weighed against human identity, is nothing.

Language matters, especially to those whose gender doesn’t match cultural assumptions. Are we just going to let everyone select their own gender identity and how they want to be addressed? Yep. If that requires some effort from you personally, suck it the hell up.

Either use the singular they because this is one way to call people what they wish to be called, or do it because it’s neater, tighter, more modern, more efficient and evidence that — happily — languages evolve. Whatever floats your boat. Adding they to he and she will confuse you at first but you’ll get used to it. We always do.

Corporate copywriter, writing trainer and keynote speaker Tiffany Markman contributes #WritersBlock to MarkLives . This article was originally published on MarkLives on 23rd June 2022. To get more writing like this, sign up here.